The Baniaka Project (Baniaka) comprises the Baniaka and Baniaka West exploration licences covering a total area of 881km2. Baniaka is Genmin’s most advanced project and exploration since 2013 has defined a cumulative strike length of 85km of iron mineralisation, which has been subdivided into 17 prospects. 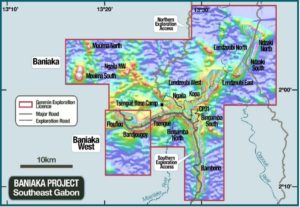 Genmin has defined Inferred and Indicated Mineral Resources at Baniaka totalling 257.9Mt of iron ore at an in-situ grade of 40.1% Fe reported in accordance with the Australasian Code for Reporting of Exploration Results, Minerals Resources and Ore Reserves 2012 Edition (JORC). This positions Baniaka as one of the major mineral deposits in Gabon.

The iron mineralisation comprises a surficial blanket of unconsolidated detrital iron deposits (DID) underlain by oxidised Banded Iron Formations (BIF) ascribed to the Archaean Belinga Group and termed Oxide. The DID mineralisation is from 1 to 16m thick. The Oxide extends to depths of 20 to 70m below surface. The Oxide is underlain by fresh magnetite BIF (Primary). The main focus of Genmin’s exploration programs has been testing the DID and Oxide iron mineralisation.

1Detailed information on the Baniaka Mineral Resource estimate and Competent Person pursuant to JORC are set out in the Prospectus dated 9 February 2021 and lodged on the ASX platform on 9 March 2021.

Auger and diamond drilling conducted to date has tested approximately 29km (35%) and 14km (17%) respectively of the defined 85km BIF strike length and forms the basis for the Mineral Resource estimates.

The Company’s proposed 2021-2022 work program at Baniaka is intended to enable completion of a Preliminary Feasibility Study and the commencement of social and environmental baseline studies. The proposed work program includes:

The work program also includes exploration pitting and drilling, and geometallurgical testing at other prospects to assess the DID and Oxide potential.

Baniaka is proximal to existing and operating bulk commodity transport and renewable energy infrastructure as follows: